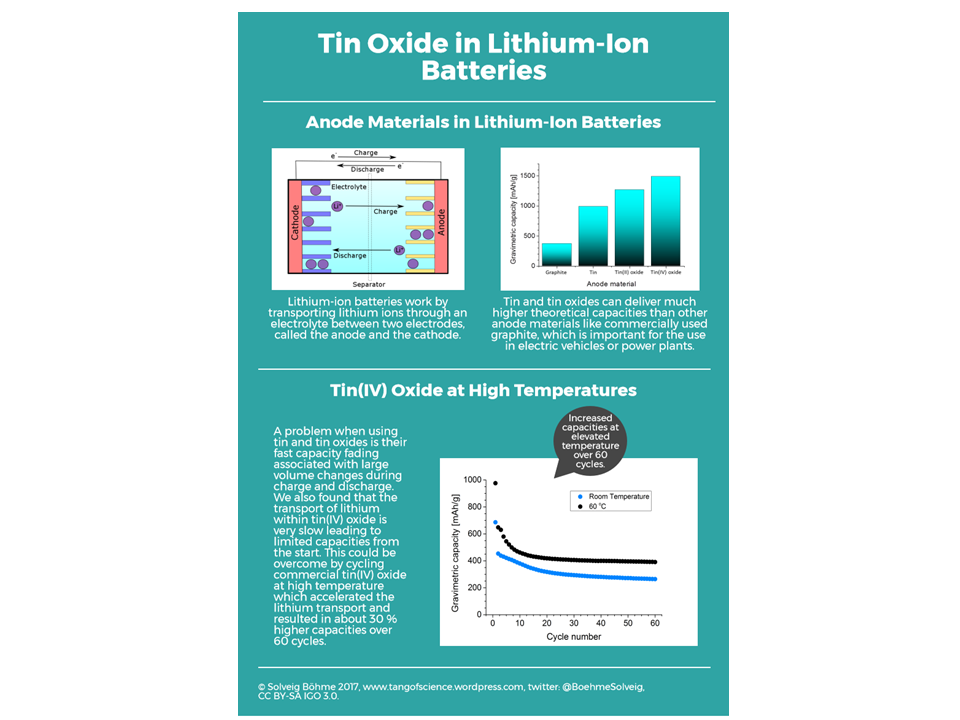 With my PhD thesis just published and my defense taking place in only a few weeks, I decided to dedicate a blog post to it. So, for those of you who wonder what I have been doing the past four and half years, pay attention, here is the answer.

The price of renewable energy is falling rapidly making it cheaper than fossil fuel based options in many parts of the world. The storage of the produced electricity in batteries has become one bottle neck for the use of renewable energy technology. It is not only large scale grid storage, but also energy storage for electric vehicles that poses a challenge. One problem is that today`s batteries cannot store enough energy for these applications which leads for example to a low range for electric vehicle batteries.

The batteries that can store most energy per weight and volume are lithium-ion batteries thanks to the low atomic weight of lithium. In such a battery lithium ions travel through an electrolyte between two electrodes which are called the postive electrode (cathode) and the negative electrode (anode). This principle is called a ”rocking chair battery” and it can be seen in the upper left image of the infographic.

When the battery is in use (or discharged) lithium is turned into lithium ions at the negative electrode (anode). The ions are released into the electrolyte and travel to the postive electrode (cathode) where they are incorporated. At the same time electrons are released from the the anode via an external circuit where they can power an electric device. This process is reversed during charge when an external electrical power is applied that forces electrons and ions to migrate into the reversed direction.

I have studied the negative electrode or anode of lithium-ion batteries. In portable electronics like mobile phones and laptops graphite represents the most common anode material. However, it can only incorporate a limited amount of lithium which results in a relatively low energy density (also called capacity). Graphite can store 372 mAh/g of energy when incorporating lithium which is not enough for an efficient use in electric vehicles. Therefore anode materials with higher energy densities are desirable to achieve longer battery ranges.

One possible alternative is tin which has a capacity of 991 mAh/g. However, when using tin oxides even higher energy densities can be obtained, with 1271 mAh/g for tin(II) oxide and 1491 mAh/g for tin(IV) oxide. The theoretical capacities can be seen in the upper right picture in the infographic. The most famous issue associated with tin based materials is the rapid loss of energy density during battery operation which is caused by volume changes the material undergoes during charge and discharge. However, in my work I have  paid special attention to some other challenges when using tin(IV) oxide as a negative electrode material in lithium-ion batteries.

Despite the high theoretical energy density (1491 mAh/g) described above, tin(IV) oxide usually shows practical energy densities below 1000 mAh/g when used in lithium-ion batteries. I have studied this phenomenon and found that extremely small tin(IV) oxide particles (< 10 nm = one ten thousandth mm) have to be employed to obtain the full energy density. The reason for this is that lithium moves very slowly through tin(IV) oxide. In smaller particles the distances that lithium needs to travel are much shorter which means that more lithium and with that energy can be stored or extracted in short timespans.

Another strategy explored to improve the transport of lithium in tin(IV) oxide was battery operation at high temperatures. The reason for this was that heat accelerates the movement of ions, atoms and molecules. In other words, it increases the speed of the lithium traveling through tin(IV) oxide. The lower image of the infographic shows that the energy density of tin(IV) oxide was larger when cycling at 60 degrees Celsius (140 degrees Fahrenheit) instead of room temperature, increasing with about 30 % over 60 charge-discharge-cycles. Therefore, using tin(IV) oxide at high temperatures in lithium-ion batteries could be a good strategy to improve its performance. This finding is especially valuable for the possible use in batteries for hybrid electric vehicles where manufacturers are striving to reduce the number of cooling systems. A battery that could operate at 60 degrees Celsius would be a huge advantage here. Nevertheless, many more tests need to be conducted before such an application.

Other battery materials like the electrolyte (between the two electrodes) can, however, not withstand operating temperatures above 60 degrees Celsius. Thus, we tried to use an alternative, more heat resistant (thermally stable) electrolyte to use tin(IV) oxide at a higher temperature, i.e. 80 degrees Celsius (176 degrees Fahrenheit). This electrolyte was a so-called ionic liquid, which is defined as a salt that is liquid at room temperature. Unfortunately, the ionic liuid electrolyte proved to be unstable towards the reactions happening during battery operation despite its generally good thermal stability. As a consequence, the search for suitable high temperature electrolytes will have to continue in the future.

In summary, it seems that the battery performance of tin(IV) oxide as a negative electrode material in lithium-ion batteries can be significantly improved at high temperatures. Nevertheless, more suitable electrolytes will have to be found and more tests need to be conducted in order to make this strategy practically feasible. Another approach to obtain higher energy denisties is the use of extremely small tin(IV) oxide particles below 10 nm.