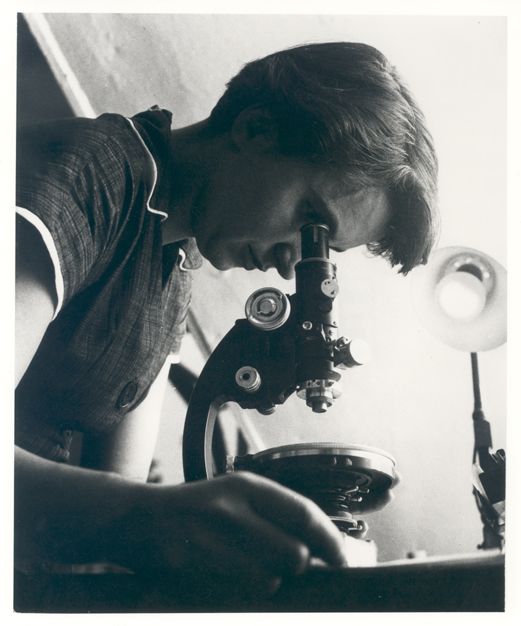 One of the most important researchers involved in discovering the structure of DNA (deoxyribonucleic acid) would have celebrated their 99th birthday on July 25 this year. No – it is not James Watson or Francis Crick. It is Rosalind Franklin, a brilliant chemist, whose contribution to the discovery of DNA’s structure has gone largely unrecognized.

Rosalind Elsie Franklin was born 1920 in London. Aged only 15 she decided she wanted to be a scientist. Her father discouraged her scientific interest knowing that at the time such a career choice would be very difficult for women. Nevertheless, in 1938 Franklin enrolled at the University of Cambridge to study Chemistry.

After graduating in 1941 Franklin was awarded a research scholarship to complete a PhD. However, this work was cut short by the start of World War II. The young researcher gave up her scholarship in order to work for the British Coal Utilisation Research Association, where she investigated ways to use coal and carbon in the war effort. Fortunately, she could adopt this research into her doctoral thesis and received a PhD from the University of Cambridge in 1945.

In 1947 Franklin went to Paris, where she worked with Jacque Méring, an expert in X-ray crystallography. X-ray crystallography or X-ray diffraction is a technique that uses X-rays to determine the arrangement of atoms in a material. It is still widely used today in scientific research.

Her time in France not only taught Franklin the technique of X-ray crystallography, but also how to tackle scientific challenges. She would later need both skills to discover the structure of DNA.

So, why did people bother to figure out the structure of DNA? DNA or deoxyribonucleic acid is the genetic material inside your cells. DNA is like a blueprint or building plan for your body. It basically tells the cells of your body what to do. Almost all organisms store this building plan as DNA in their cells.

In 1951 Rosalind Franklin returned to Britain joining King’s College in London. There she started applying her knowledge about X-ray crystallography to study DNA. Franklin’s biggest contributions in the hunt for the DNA structure was finding the density of DNA and the insight that DNA forms a helix. A helix is a structure that looks like a cork screw or a wound staircase.

Franklin did not know that she was in a race with two other scientists from the University of Cambridge, James Watson and Francis Crick. Even worse was that Franklin’s colleague at King’s College Maurice Wilkins had developed a friendship with Watson and Crick. Without Franklin’s knowledge or permission Wilkins passed on her results to Watson and Crick.

Finally, Watson and Crick combined Franklin’s findings and her X-ray diffraction images of DNA with their own research. Again, this was all done with neither Franklin’s knowledge nor her permission. In April 1953, together with Wilkins, they announced that the structure of DNA was a double helix, or in other words a wound ladder. The race was over.

Soon after Franklin took a position at Birkbeck College, London, where she continued to work on coal and DNA. In addition, she started to determine the structure of viruses, which Franklin herself saw as her biggest success. Rosalind Franklin died of cancer in April 1958, aged only 37. She never knew of the contribution she had made to discover the structure of DNA.

James Watson, Francis Crick and Maurice Wilkins were awarded the Nobel prize in Medicine for the discovery of the structure of DNA in 1962.

When discussing why Franklin did not receive the Nobel prize, the first argument is always that she died it was awarded in 1962. It is true that the Nobel prize is only awarded to people who are alive. However, in my opinion it is very unlikely that Franklin would have received the prize even if she had been alive in 1962.

There are two reasons for this. The first is that Watson, Crick and Wilkins never mentioned Franklin’s results in their publications despite having used them for their own work. In fact, Franklin never knew herself how much she had contributed to their model.

The second is that at the time women were just not well regarded in Science. When Franklin died in 1962 only three women had ever won the Nobel prize, Marie Curie, Irene Joliot-Curie and Gerty Cori. In addition, she had to battle the sexism in Science in her everyday life by protesting her lower pay and lack of promotion compared to her male colleagues.