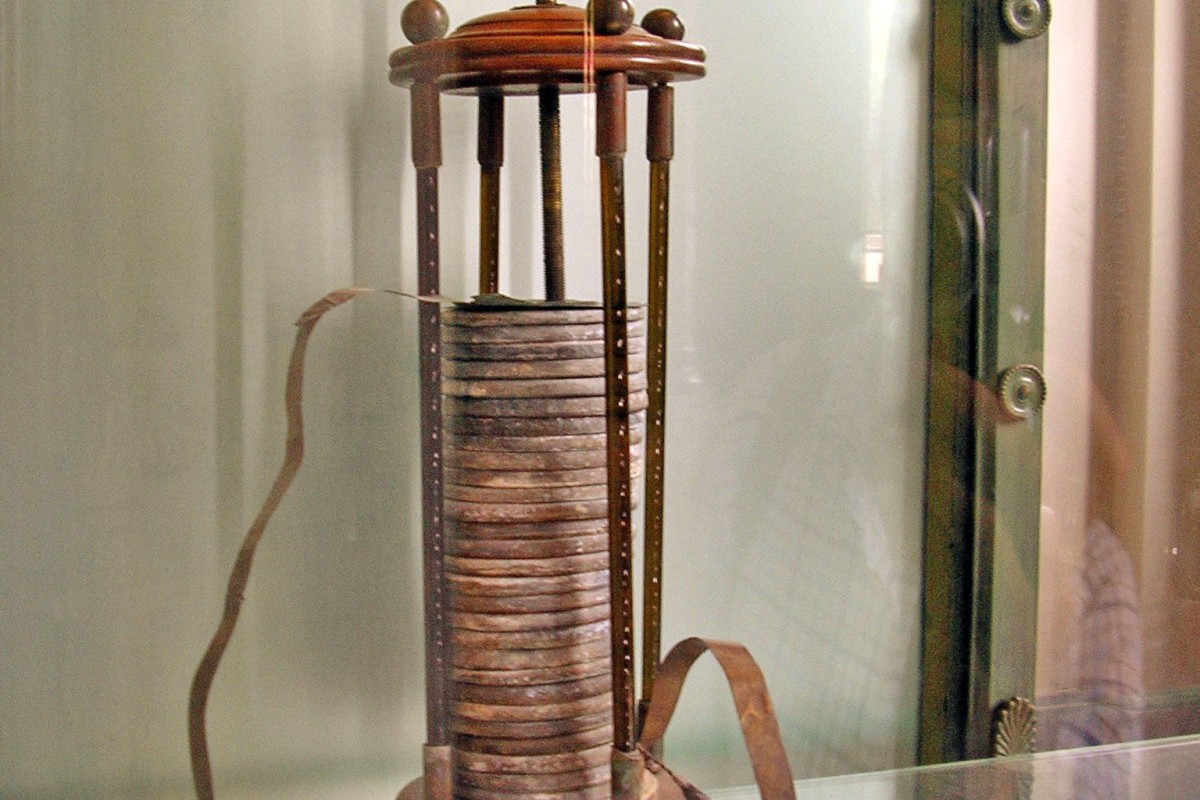 Batteries have actually been around much longer than most people think. The first battery that we have proof of dates back to about 200 BC. This ”Bagdad battery” was discovered 1938 by archeologists in Khujut Rabu close to Bagdad. It consisted of a clay jar which contained an iron rod encased in a copper cylinder. This primeval battery was able to deliver a potential of 1.1 V when the jar was filled with vinegar as the electrolyte. Though there are no written records about their application, scientists assume that they were used to electroplate items, i.e. to put gold coatings on metal objects.

We have to fast-forward to the year 1800 to find the next historic battery, the ”Voltaic pile”. It was developed by Alessandro Volta in Italy and consisted of alternately stacked zinc and silver discs. In between the discs Volta placed cardboard soaked in salt water. When a wire was connected from the bottom zinc to the top silver disc it could produce sparks. Another discovery we have to thank Volta for is the electrochemical series which arranges metals according to the potential they can deliver against a standard electrode.

The next step was taken by the British researcher John Frederich Daniell who developed the Daniell cell around 1820 which could deliver more stable currents than the voltaic pile. It consisted of a zinc plate and a copper plate that were placed in separate vessels filled with a liquid electrolyte. A salt bridge was added between the two vessels and a potential of about 1.1 V could be delivered. The Daniell cell was used to power, e.g. telegraphs and telephones for over 100 years.

In 1859 French physicist Gaston Planté started experimenting on what would later be known as the lead acid battery, also being the first rechargeable battery. It consisted of two rolled-up lead sheets with a piece of flannel placed in between them. This assembly was immersed into dilute sulphuric acid. Many improvements have been made since then to reduce the amount of liquid acid in the battery, but their working principle has not changed. They are still widely used today, for example as car batteries.

French scientist Georges Leclanché developed a smaller and lighter, but non-rechargeable, battery in 1866, the Leclanché cell. It was made up from zinc, manganese oxide mixed with carbon and an ammonium chloride electrolyte. These cells were widely used for almost 100 years until they had to give way for the newer alkaline-manganese batteries in the 1960s.

The alkaline-manganese battery (or alkaline battery) was developed as a small, light and non-rechargeable cell in 1949 by the Canadian engineer Lewis Urry. It was based on the same chemistry as the Leclanché cell using zinc and manganese oxide. But the ammonium chloride electrolyte had been substituted with potassium hydroxide. These cells are the most popular non-rechargeable battery system today.

The lithium-ion battery is probably the most reasearched battery system today. It was first introduced in 1991 by Sony after several seperate inventions of John Goodenough, Rachid Yazami and others. These batteries are the most energetic rechargeable batteries available and power almost all portable electronic devices like computers and mobile phones. Lithium-ion batteries are based on a rocking-chair-principle were lithium ions can be transported through an electrolyte between two electrodes. Common commercial electrode materials are graphite and lithium cobolt oxide or lithium manganese oxide. However, there is still a huge amount of research being carried out in order to find better materials.

At the moment there is also a growing amount of research on new battery chemistries, which include the sodium-ion battery, magnesium-ion battery, potassium-ion battery and more. They normally orperate on the same rocking-chair-principle as lithium-ion batteries. The reason for this kind of research is that lithium is a very limited raw material, while other materials like sodium are much more abundant on Earth and therefore cheaper. It will be very interesting to find out if any of these batteries will be commercialized on a large scale in the future.