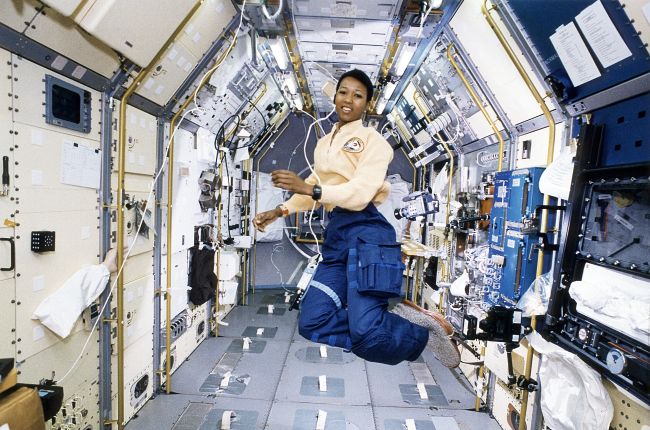 When I started this series, my goal was to further diversity in Science and to raise aspirations among girls to choose a career in Science.

Thanks to the Black Lives Matter movement, I have realized that the scope of this series has remained somewhat limited. Being a white woman myself, I have so far mainly focused on white female scientists.

However, I cannot truly further diversity in Science and raise aspirations of non-white girls if I do not write about non-white women as well. Therefore, I have chosen to tell the story of a black female scientist this time. Her name is Mae Jemison.

Mae Jemison is mainly known for being the first black woman in space. In 1992, she spent eight days orbiting Earth in the space shuttle Endeavour. Nevertheless, she has had a very diverse career in many different areas and it would be wrong to reduce it to only one space flight.

Jemison was born 1956 in Alabama, USA, but her family moved to Chicago when she was only three. From an early age on, she was interested in Science, especially in Astronomy. The girl’s fascination with space was additionally fueled television series like Star Trek and the appearance of Lieutenant Uhura, a black female character.

Jemison’s parents, a maintenance worker and an elementary school teacher, supported her interest in Science. However, she did not feel like she received much support from her teachers in school over the choice of her future career due to her gender and skin colour.

In 1973, aged only 16, Jemison started studying Chemical Engineering as well as African and Afro-American studies at Stanford University where she graduated in 1977. The young woman then continued on to Cornell University where she received a Doctor of Medicine degree in 1981. While at Stanford, she continued to experience discrimination from her teachers due to her skin colour.

After a short time practicing medicine in Los Angeles, Jemison volunteered for the Peace Corps as a medical officer in West Africa. In this role, she was involved in several projects to improve public health, for example the development of a vaccine for hepatitis B. Jemison returned to Los Angeles as a Medical Doctor in 1985.

Jemison was encouraged by the fact that Sally Ride became the first American woman in space during the early 1980s. So, she applied to join NASA’s astronaut corps and was selected for training in 1987.

12 September 1992 was the big day. Jemison launched into space together with six other astronauts on board the space shuttle Endeavour. They orbited Earth 126 times in eight days. On this flight, Jemison was involved in two experiments that investigated bone cells.

Mae Jemison left NASA in 1993 and started her own technology research company, the Jemison Group, Inc. Its goals are, among others, to improve health care and advance technologies in developing countries. The former astronaut remains a strong advocate for science education. For example, she has founded an international science camp for high school students.