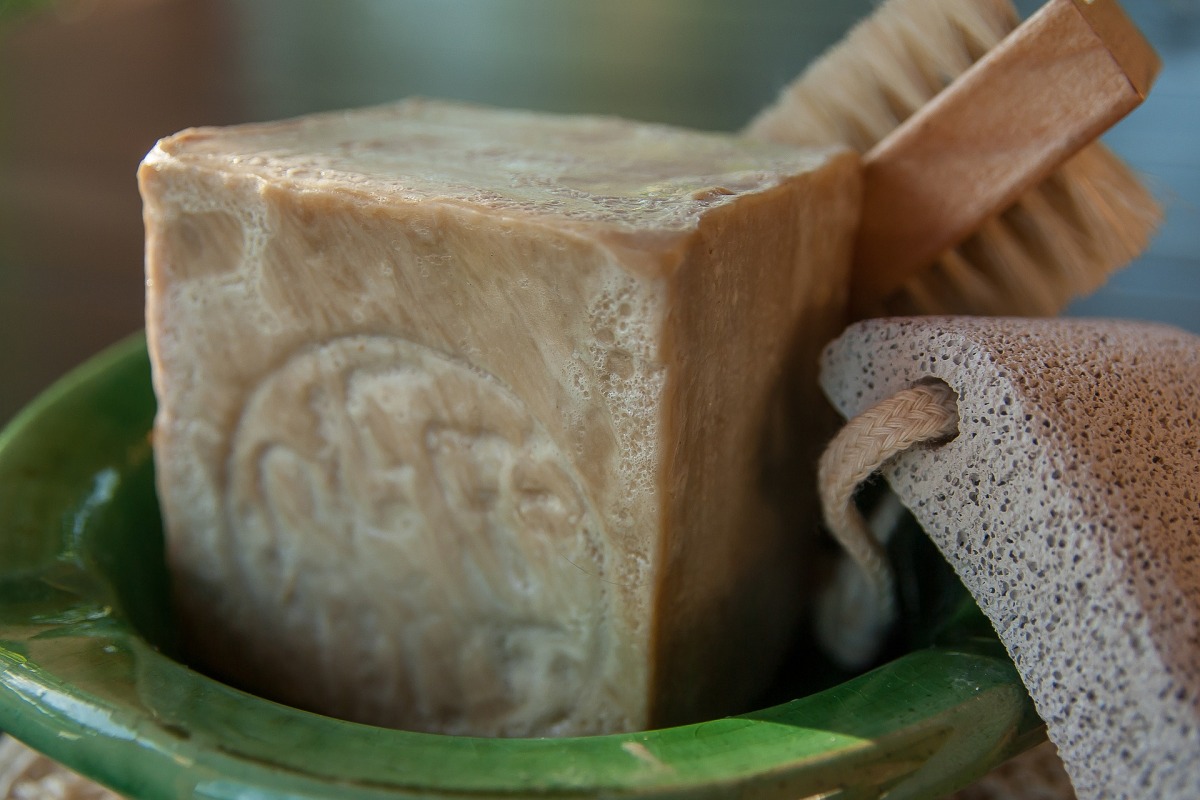 Soap is made via a chemical reaction between a fat and sodium hydroxide (NaOH). The reaction is called saponification and produces salts which consist of sodium ions and fatty-acid ions. The latter have one long chain of carbon atoms each. These sodium-ion fatty-acid salts are very good at removing dirt and we also call them soaps. Their secret is that the non-polar, long carbon chains of the fatty acids are aranged in spheres around the non-polar dirt particles. The opposite chain ends, where the polar sodium ions are attached, face the polar water. These arrangements are called micelles and they can dissolve dirt from your clothes or skin.

Making soap in this way is actually quite environmentally friendly. Sodium hydroxide is normally used in the form of lye which is made by leaching wood ashes with water. Historically, the fat has often come from animals, but today fats from plants, such as olive oil or grapeseed oil, are used since they create nicer soaps. In summary, soap can today easily be produced using only renewable sources from plants.

Sounds like soap making is an eco-friendly process? Yes, but unfortunately reality looks very different. When I researched this topic, I was really shocked when I found out which substances are actually being put into these products, despite better knowledge.

Let us start by talking about the actual cleaning agents, the substances that remove the dirt. Traditionally, soaps as described above have been used for this task and I believed that this was still the case. But it turns out that today most cleaning agents are made from petroleum instead of vegetable oils. These petroleum-based chemicals work the same way as real soap does by forming micelles around dirt particles to dissolve them. They are, for example, found in laundry detergent and liquid body wash. Only bar soaps still contain the more environmentally benign, real soaps. But be careful, not all of them do. You should check if it actually says ”soap” on the packaging to be sure.

There are even more reasons why solid soap products are more environmentally friendly. On average the production of bar soap consumes five times less energy than liquid soap. Another important factor is water. Liquid soaps as well as liquid laundry detergents contain 80 % more water than their solid counterparts. In addition, liquid products come in non-reusable plastic bottles, while the solid products come in cardboard packaging.

Besides the petroleum-based cleaning agents, manufacturers often add a range of other questionable chemicals to liquid soaps. One famous example are parabens which are added to about 85 % of all liquid cosmetic products to prevent bacteria and fungus growth. Parabens can be mistaken for estrogen by the body which has been linked to both breast cancer and reproductive issues. It will be interesting to see if they could be related to the recently reported drop in sperm count among Western men. Also, paraben substitutes like phenoxy ethanol should be used with caution. Bar soaps and other solid cosmetic products, on the other hand, do not need any preservatives and are a healthier choice.

Some harmful chemicals could also be hiding under the label ”fragrance” or ”parfume”. Their compositions do not have to be revealed as they are considered trade secrets which leaves the consumer clueless about what they are made of. At least one villain chemical, called phthalates which has been linked to many health issues, is often included in parfumes as a preservative.

So, the bottom line is: use bar soaps, make sure that it contains real soap and check that all contents are revealed. As for laundry detergent, washing powder is better than liquid detergent. You can also easily make your own laundry detergent and bar soaps at home.