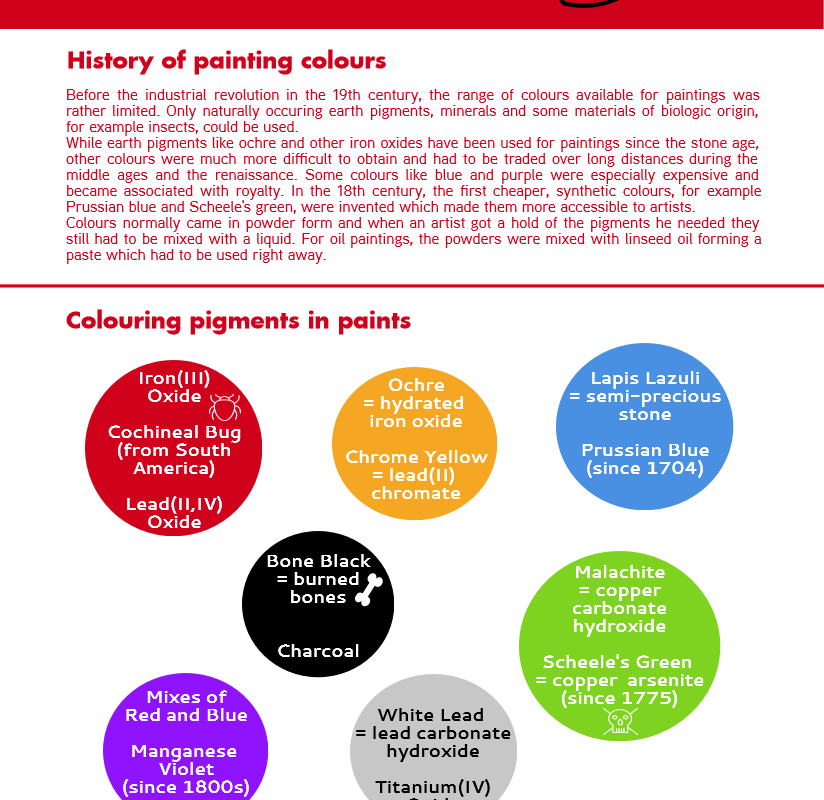 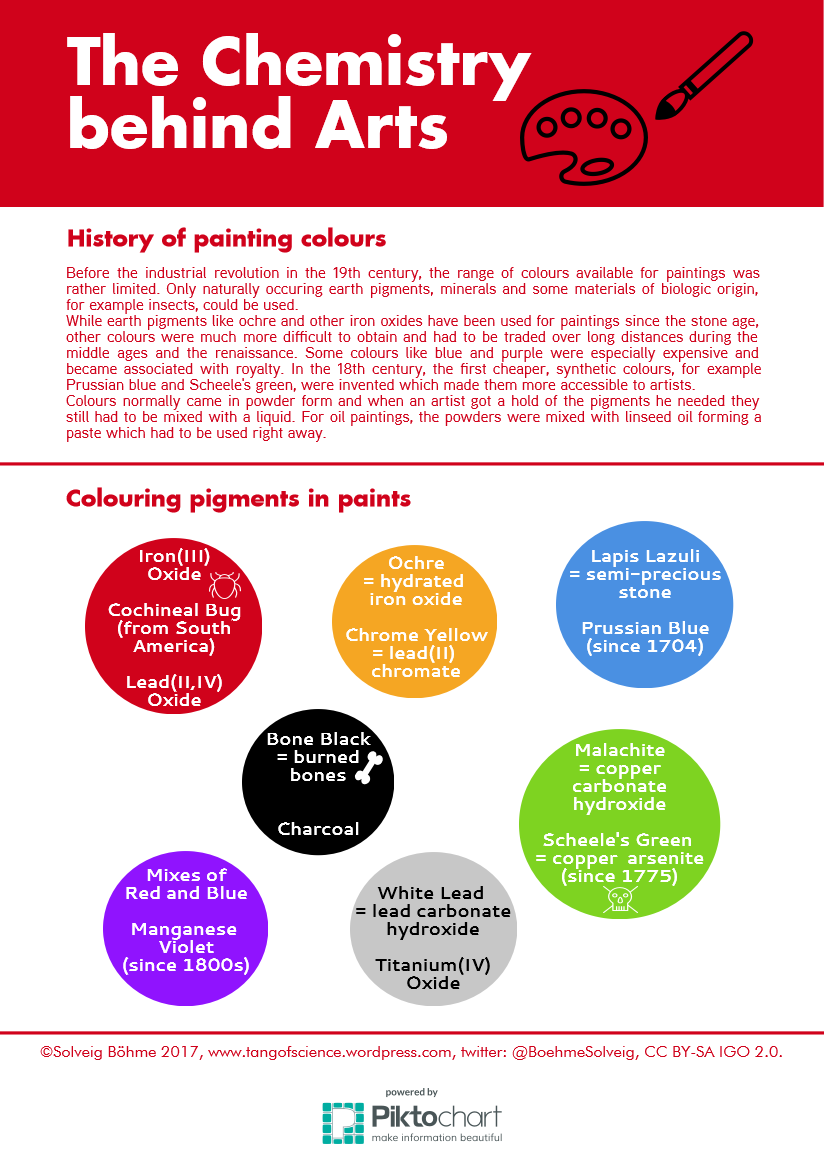 Before the industrial revolution in the 19th century, the range of colours available for paintings was rather limited. Only naturally occuring earth pigments, minerals and some materials of biologic origin, for example insects, could be used.

While earth pigments like ochre and other iron oxides have been since the stone age, other colours were much more difficult to obtain. They had to be traded over long distances during the middle ages and the renaissance. Some colours like blue and purple were especially expensive and became associated with royalty. In the 18th century, the first cheaper, synthetic colours, for example Prussian blue and Scheele’s green, were invented which made them more accessible to artists.

These colours normally came in powder form and when an artist got a hold of the pigments he needed they still had to be mixed with a liquid. For oil paintings, the powders were normally mixed with linseed oil forming a paste which had to be used right away. Other painting techniques preferred other liquids, for example water was mixed with colour pigments to create watercolor paintings called ”aquarelle” in French. This technique is still very common in school art lessons today.

Let us go through different colours and look at how they have been produced throughout history. You can even find the information in the infographic above.

Red – This colour can be created with iron(III) oxide which has been used since the cave paintings of the stone age. During the Roman Empire and the middle ages, another red pigment called ”minium” with the chemical name lead(II,IV) oxide became popular, especially to colour manuscripts. Lead-containing substances like minium are poisonous and small amounts are accumulated in the body during permanet exposure. This shows that not all the colours used by artists throughout history were safe and we will encounter even more toxic pigments further on. Fortunately, a non-toxic red pigment came into use during the 16th century. It consisted of the dried, pulverized bodies of female cochineal bugs from Southern America. This pigment is still used today, for example in lipstick colours.

Yellow – Also yellow pigments have been around since the stone age. They were produced from ochre, which has the chemical name hydrated iron oxide. In 1797, the synthetic pigment chrome yellow, also called lead(II) chromate, was invented by mixing solutions of lead nitrate and potassium chromate. It became popular among artists during the first half of the 19th century. Due to the contained lead and chromium this pigment was poisonous as well.

Blue – Before the 18th century the main source of blue pigments was a semi-precious stone called ”lapis lazuli” which could only be found in one mountain range in Afghanistan. This is the main reason for its high price and the difficulty to obtain blue colours. The situation changed in 1704 when Prussian blue was invented as a cheaper, synthestic pigment. Prussian blue refers to range of compounds that are made up from iron, carbon and nitrogen. Carbon and nitrogen are joint together as cyanide ions that form so-called coordination complexes with iron in the center. Despite the presence of cyanide ions, these pigments are non-toxic and still in use today.

Green – Originally, the mineral malachite with the chemical name copper carbonate hydroxide has been employed as green pigments. In 1775, the Swedish chemist Carl Wilhelm Scheele invented a substance called copper arsenite which became a popular pigment under the name Scheele’s green. You might have guessed it from the chemical name, this compound contained arsenic which made it very toxic. Among all the poisonous colouring agents that have been used throughout history, this was probably the most lethal one. Especially its use in wall paper and clothing has been linked to many deaths during the 19th century in Britain and Europe.

Violet – Traditionally, mixtures of red and blue were used to create violet. The difficulty in obtaining blue colours made violet very expensive as well. During the 19th century, the first synthetic, cheaper pigment called manganese violet became available. Its chemical name is ammonium manganese(III) pyrophosphate and it is still used in cosmetics such as makeup and hair colouring.

White – For a long time, a compound called lead carbonate hydroxide or white lead was used to produce white colours for paintings. But just like lead(II,IV) oxide (minium), its use is banned today due to the toxicity caused by the contained lead. The white pigment most commonly employed now in paints is titanium(IV) oxide.

Black – Just like red and yellow, black pigments have been around since the stone age and quite easy to make. The earliest black pigment was probably charcoal produced by burning wood or other vegetation. A popular method to create black pigments during the 17th and 18th century was burning animal bones in air-free chambers which resulted in pigments referred to as ”bone black”.