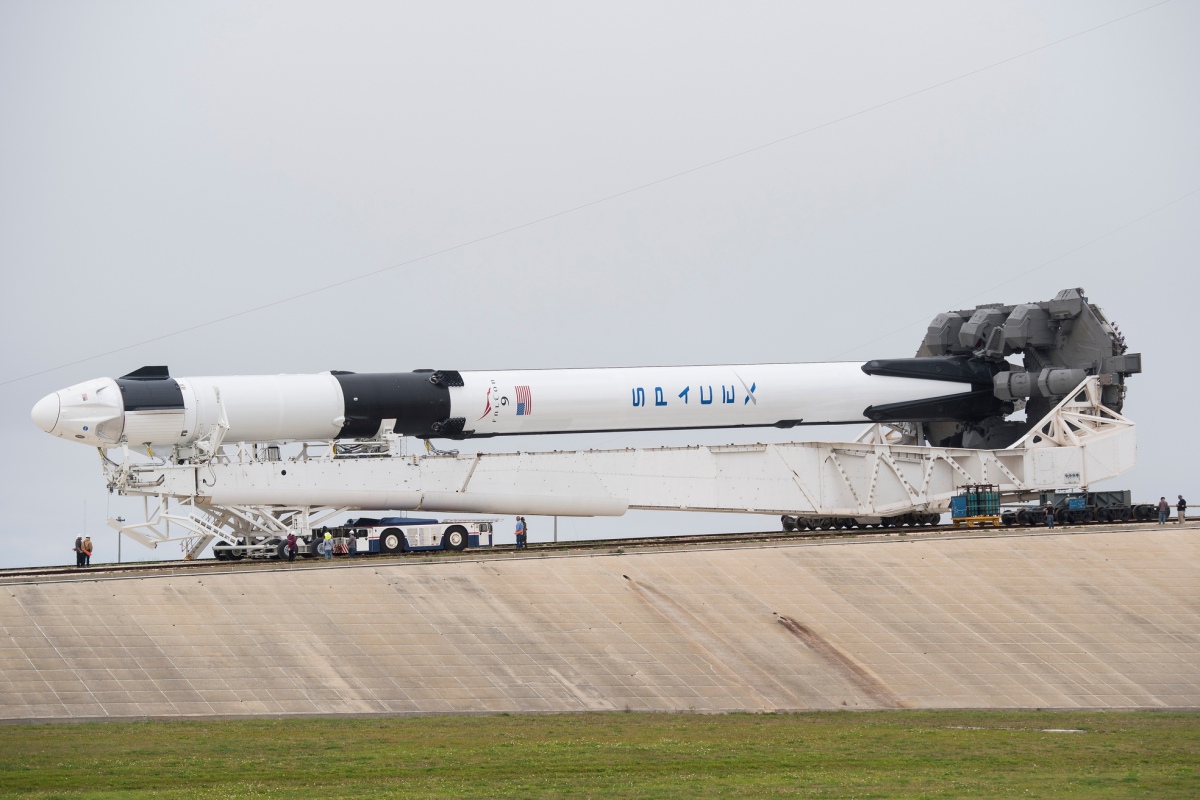 Image: SapceX’s Falcon 9 reusable rocket with the Crew Dragon on top being transported to the launch site in Cape Canaveral, Florida. Credit: NASA.

Last night 8.22 pm British time, me and my husband were glued to the TV excited like young school children. The reason? NASA and SpaceX were launching their new Crew Dragon space craft to take humans to the International Space Station (ISS) from US soil for the first time since 2011.

We watched amazed how the Falcon 9 rocket lifted off and separated successfully from the Crew Dragon. Afterwards the rocket flew back to Earth landing on a barge in the ocean. Instead of using the boring word ”barge”, SpaceX has come up with a much fancier word for this kind of vessel, ”autonomous space craft drone ship”. The maneuver looked like SpaceX was trying to flip a drinking straw getting it to stand up straight on a match box and it worked. Amazing!

While astronauts Bob Behnken and Doug Hurley are still on their way to the ISS, many are celebrating this historic moment in space flight on Earth. The successful landing of a rocket to be reused after sending humans into space is a massive achievement and will potentially make space flight much cheaper in the future.

Not to talk about the fact that the US are finally able to send humans into space again. Since scraping the space shuttle program in 2011, US astronauts had to hitch rides in Russian Soyuz Capsules from Kazakhstan. Launching from their own soil again is an important step in NASA’s plans to put humans on Mars during the 2030s.

Why am I so excited about this? Why do I cheer for two American astronauts who get to go to space, when I will probably not even get to go on holiday this year nor see my family in Germany due to Covid 19 restrictions?

The reason is that this has shown me that despite all the problems the world is facing right now, we are still moving forward. Covid 19 has not stopped scientific progress. By still sending people into space we are following the deep human instinct of curiosity and exploration to push further and go where no one has been before. The Corona crisis has not taken this from us.

It has also given me hope, especially with the situations in the UK and US. International attention on the US lately has not exactly been flattering due to President Trump’s argument with Twitter about fact checking and the death of George Floyd, an African American killed by a brutal police force. The launch of the Crew Dragon has reminded me that there is still another America, one that is intelligent and innovative.

On the other side of the Atlantic, the last week in the UK has been dominated by ”Cummings-gate”, the scandal caused by Prime Minister Johnson’s senior advisor who thought he stood above the Corona lockdown rules, taking a trip across country to his parents and beauty spots. The British government handled this matter in the ugliest manner possible, showing how little they care about people’s feelings.

Let us start with a brief introduction about where we are today. The International Space Station (ISS) or the Orion spacecraft that is currently developed by NASA contain a wide range of materials for different tasks. Nevertheless, the ISS modules, especially their hulls, consist mainly of an aluminum-copper alloy called 2219-T6 aluminum alloy. It has an aluminum content of about 91 to 94 % making aluminum the major element on the ISS. This aluminum alloy posseses high strength, but also low weight, two important properties for space flight.

If not aluminum-copper alloy, what are starships like Voyager or the Enterprise made of? In Star Trek the fictional alloys ”duranium” and ”tritanium” are used for the construction of starship hulls. They are suitable for this task due to their extreme hardness. Nevertheless, it is not clear which metals these alloys contain. Could they have been developed from the 2219-T6 aluminum alloy used on the ISS?

Star Wars is much less clear on the materials used in spacecrafts or the Death Star. For this reason, it has often been assumed that materials known today are employed. When calculating what it would cost to build a Death Star, ifls supposed that it consists of the same materials as the aircraft carrier USS Ranger. This would mean that the Death Star is mainly constructed from steel (or iron) which is a strong material, but much heavier than aluminum-based alloys. However, since a Death Star would be constructed in space and is not meant to land on planets, its weight would be less important.

There is one technology Star Wars is more clear about. Its spacecrafts use an ion propulsion drive for their sub-light engines, also called thrusters. This technology has been used by NASA since the 1960s and new engines will be a vital part of future space missions, for example to Mars. Ion propulsion works by ionizing a gas, normally xenon. Positively charged xenon ions are created and accelerated towards a negatively charged grid (an electrode with holes). They leave the engine as an ion beam which produces thrust. This technology can provide higher speeds while using less material than chemical propellants.

This leads us to the faster-than-ligh-speed engines. They are called Hyperdrive in Star Wars and Warp Drive in Star Trek. Here, Star Wars is again more vague on the materials used. In Star Trek the material ”dilithium” is essential for the function of the Warp Drive. In reality, dilithium is a molecule composed of two lithium atoms. While it has been speculated that dilithium could also refer to an unknown isotope of the element lithium, it was shown in Start Trek: The Next Generation that dilithium is an element with the chemical symbol Dt and the atomic number 87 which belongs to francium in reality.

We should not forget other possibilities for space travel, like the Stargate, a device that can create artificial wormholes for instant transport to other planets in the Stargate series. It is constructed from ”naquadah”, a superheavy metal that does not naturally occur in our solar system. This element has been indicated to belong to the so-called island of stability. The stability of elements heavier than uranium decreases with increasing atomic number. But some very heavy elements with a ”magic” number of protons and neutrons are predicted to temporarily reverse this trend and show a greater stability.  These elements are expected to occur from the atomic number 120. The heaviest element discovered by humans so far is oganesson with the atomic number 118.

So, maybe we are not too far from naquadah and Stargates after all… 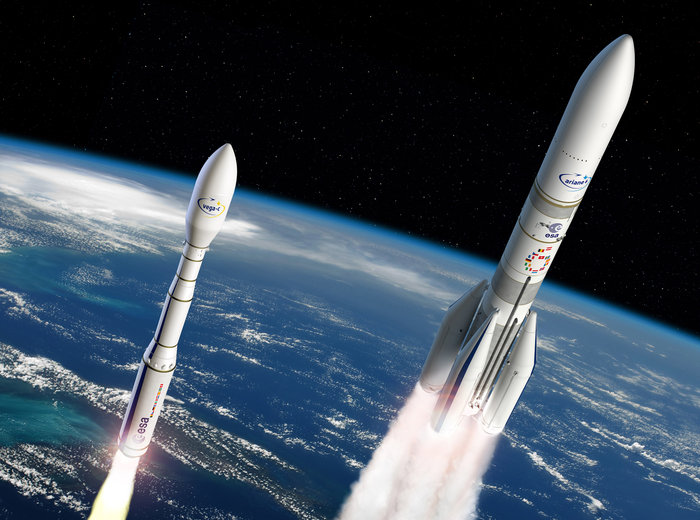 In January 2017 two astronauts on the ISS went for spacewalks to upgrade power storage batteries outside the station. Nickel-hydrogen batteries originally designed specifically for space stations and satellites had been used during the first battery installation. They had reached the end of their lifespan and were replaced by more modern lithium-ion batteries which will be in service until the ISS is decommissioned 2024.

The advantage of nickel-hydrogen batteries was their long lifetime withstanding large numbers of charge-discharge cycles. But they were sensitive to ”battery memory” meaning they could loose part of their capacity if not charged and discharged completely during each cycle. The main task of the ISS batteries is to store the energy produced by the solar panels during its 45 minutes in sunlight. This electricity is used during the following 45 minutes in darkness wich the ISS passes through with every orbit.

Batteries on Satellites and Space Crafts

Just like the ISS, space crafts and satellites need access to energy when being in the shadow of a planet. Therefore, they normally also carry batteries for the storage of energy produced by sun light. Batteries are also needed to kick-start operating systems before the solar panels are unfolded. In addition, rockets rely on the use of high-power batteries for autonomous operation during the launch into space.

Some space crafts like ESA`s Huygens probe run with non-rechargreable batteries (lithium sulphur dioxide batteries) when solar panels are impractical. Space crafts venturing very far from the sun like the Cassini mission to Saturn or New Horizons to Pluto by NASA depend on electricity from so-called radioisotope thermoelectric generators (RTGs) instead of solar panels or batteries. These produce electricity from the decay of radioactive plutonium.

During the early days of space flight, nickel-cadmium batteries were used for energy storage. However, they were soon supplanted by the nickel-hydrogen technology described above. These are now in turn slowly replaced by lithium-ion batteries. Their biggest advantage for space travel is the high energy density meaning they can store a lot of energy at a low weight and small volume. One major challenge regarding the use of lithium-ion batteries in unmanned space flight is their sensitivity towards the extremely low temperatures in space. Another problem is the long battery lifespan of 1000 to 33000 cycles required in space missions which can take up to 15 years. Despite these obstacles work is ongoing to improve the lithium-ion battery technology for further applications in space. 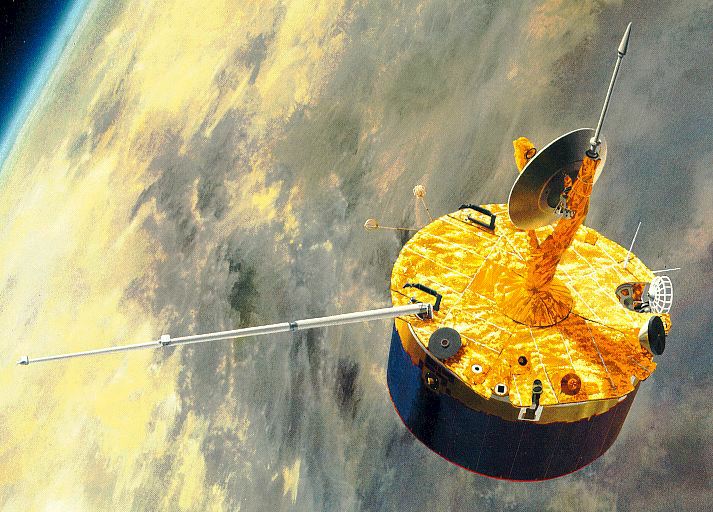 One thing I have been wondering for a while, ever since reading about a study in which Japanese Whiskey was sent to the International Space Station (ISS) for aging experiments: How can you get one of your own experiments into space? How does it work if you are not a Superman-like NASA astronaut, but only a small, mortal scientist?

The answer seems to be: Not too difficult. At least not, if you have a really good idea.

There are basically two different routes you can take to get your own research into orbit. Which one you choose will depend on if your experiment needs a human conducting it or if it can be run autonomously in a confined space. In the first case your experiment would be sent to the ISS where an astronaut would conduct it for you. The second scenario would be much cheaper as you could launch your experiment in a satellite and monitor it from earth.

If you want to have your research conducted on the ISS, you can do it by applying directly to NASA. Here you can find more detailed information about this. The biggest hurdle will mostly likely be to find enough funding. ESA also sometimes calls for proposals for experiments to be taken to the ISS. This process is similar to applying for beam time at, e.g. neutron source or synchrotron facilities.

You can more frequently submit proposals to ESA for experiments to be taken into orbit by satellites. Depending on the needs of your specific experiment, there are different options available. Another possibility would be the Do-it-yourself-approach, i.e. using your own home-made statellite. Today there are even relatively cheap satellites in the size of milk-cartons or smaller (called SmallSats or CubeSats) available for purchase from different companies. This technology is currently limited by too few launching possibilities (i.e. room on and number of launches), but it could significantly reduce the cost and bureaucratic hurdles for space-faring science experiments in the furture.

Now all you have to do is to come up with an experiment to send into space. Good luck!